On 12th October the Battalion moved some 10 miles South of Cuyk to St Anthonis and here we heard details of the plan. 8th Brigade was to begin by capturing Overloon, then 9th Brigade was to clear the woods to the West and South West of Overloon, and finally 185 Brigade were to pass through 8th Brigade and capture Venray.

On the evening of the first day - the day of the 8th Brigade attack on Overloon - the Brigadier and the Commanding Officer, Lt-Colonel Harris, went forward to see as much as possible of the woods that the Brigade was to attack.

The attack had gone well and Overloon was reported taken, but on the right, pockets of enemy were still being snuffed out, and reconnaissance was hindered by mortar and machine gun fire, as well as by the fading light. Gradually, however, a plan was hammered out and, to initiate the operation, 2 RUR was to clear and consolidate the first of the two large woods South and South east of Overloon which, for convenience, we shall call Wood [X] and Wood Y. 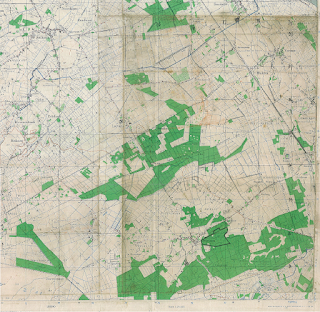 An assembly area was fixed in a wood a mile North of Wood X .and the start line for the attack was to be the Overloon - Oploo road. Zero was fixed provisionally for 0800 hrs, but routes from the assembly area that were passable and not mined had to be reconnoitred for both infantry and tanks and Zero was eventually put back to 0900 hrs.

In support we were glad to find two squadrons of Churchills of the Grenadier Guards, old friends with whom we had trained in FLERS. Flails were present to deal with mines reported to be on a considerable scale by 8th Brigade, and flame-throwers were also at our disposal.

The Gunners were shooting a timed programme at the beginning of the attack and were thereafter available for immediate support. Typhoons could also be called upon when a suitable target presented itself.

Next morning Reveille for the Battalion was at 0300 hrs and at 0400 hrs the march to the assembly area began. Breakfast was then consumed and proved most welcome after marching four miles in the pitch darkness.

Meanwhile at 0600 hrs the Commanding officer was at 8th Brigade Headquarters to learn the latest positions on the front. He heard that the South Lancashires now had a company in the Northern end of Wood X but detailed information about the move could only be gained at the South Lancashires Headquarters. Here we found that this company had established itself without much trouble by first light.

There were apparently few Boche on the ground, though mortaring and shelling - quiet by night - might prove difficult for troops moving in the open by day. With this information Company Commanders and the Tank troop leaders, who had all met the Commanding Officer, married up as far as they could, and then all went off to find suitable routes towards the Wood.

At 0815 hrs the Commanding Officer held a final co-ordinating conference. A Company were to lead on a one company front, as the Wood X was narrow to begin with and would only give cover to a single company at a time.

Preliminary objectives were fixed within the woods and the final objective was the most Southerly edge of the wood. The tanks were to give as much assistance as they could shooting us into the wood and then covering the clearings up to the wood, as they could not enter the wood itself.

At 0900 hrs A Company under Major Sweeny moved forward to its objective. Heavy mortaring and shelling was coming down though mainly along the line of the Overloon - Oploo road, well North East of Wood X. Major Sweeny was therefore able to avoid many casualties by keeping well to the North side of the road for as long as possible and only crossing it when the company was immediately North of the wood.

Once in the wood he had no further trouble and though he failed to locate the Company of South Lancashires in the Northern edge of Wood X, the company went forward and occupied its objectives.

D Company under Major Bird followed A Company and had no sooner passed through them than some of the difficulties of this battle became apparent. The wood was extremely variable; in some place thick enough to be impenetrable, in others it did not exist at all. German positions and abandoned equipment testified to their recent occupation.

Snipers were encountered almost at once necessitating thorough searching of every inch of the ground; mopping them up was inevitably a slow and laborious process. Sjt Schofield did excellent work here. He had hardly set off with his platoon in one direction when a burst of Sten fire and a few curt orders produced a German corporal out of the bushes doubling at the point of the Sten.

Returning to the chase, Sjt Schofield's platoon rounded up three more in quick succession while others were seen, to be fleeing back through the woods. In the Southerly part it was more uniform, with pine trees of medium size, hedged about with foliage and undergrowth through which a way could be forced without great difficulty.

Throughout the wood there were soft and sandy tracks which were treacherous for vehicles because of their nature and also because none of them had been cleared of mines. Neither these tracks nor the shape of the wood itself bore much relation to the map, even with a revised trace from an air photograph, so that one of the principal difficulties was finding the way.

All these factors combined to reduce the speed of the operation and it was some time before we heard D Company report their objectives - half way through the wood - secure. Some mortar fire had troubled D Company as they moved up to the wood and Lt Curran was among the casualties to be wounded by shrapnel. Once in the wood, however, it slackened off and although D Company lost Rifleman Guy in a almost direct hit from a mortar bomb, they could claim one German killed and six prisoners by the time they had reached their first objective.

Since they had met no opposition the Commanding Officer directed them to continue forward to the final objective and sent C Company, under Major de Longueuil to take over the ground that D had covered. These moves were completed without incident and soon Major Bird reported his company installed in the left hand forward edge of the wood.

Shortly after 1400 hrs, Captain Gaffikin led B Company forward to take over the right hand corner of the objective. He passed successively through A and C Companies and then liaised with Major Bird of D Company before proceeding further. Soon after he resumed his advance, the leading platoon came to a clearing and was shot at by small arms and bazooka fire from the opposite side.

No casualties were sustained, but by the time the platoon had deployed for action, the Boche had taken to his heels. B Company pressed on but saw no further signs of enemy activity before reaching and consolidating their objectives. Suddenly two Mark IV German tanks were seen moving in a South Easterly direction across the front. They were, unfortunately out of Piat range, but Captain Baudains second in command of the company, engaged them with a rifle forcing the tank commanders to keep their heads down.

Next morning our sentries saw Germans moving about in a little strip of wood opposite their position and others cycling away from it. Vigorous Bren fire and accurate sniping from Lt O'Neill and others killed at least two Germans and was thought to have wounded many more.

Battalion Headquarters moved up close to A Company soon after B Company had moved off towards the final objective. There after the evening and night were spent in dealing with problems of supply. No vehicle could be brought nearer than five hundred yards to Battalion Headquarters. Trucks had attempted it earlier but several had been bogged in the soft sandy tracks.

The tracks were in such a state that no Jeep could get further than A Company, the rear company, and in any case none of them had been swept for mines. Consequently all food had to be manhandled up to companies: so too did blankets and greatcoats later on. This entailed long and hard work by working parties who had begun the day at 0300 hrs that morning, and again most people had little sleep that night.