The latest information about the enemy was disclosed at a Brigade O Group held at the forbidding hour of 0400 hrs. 7 April. Patrols from the Lincolns had closely investigated the wood in which it was thought that large numbers of 7 Para Division were lurking, and had found nothing but abandoned equipment; they heard absolutely no sound of foreign occupation. Later a civilian was brought in who said that during the night the enemy had pulled back from these positions in an Easterly direction. The advance of 53 Welsh Division North East from Rheine had made this move probable, and it seemed likely that 7 Para Div. had now been switched from the South to cover the Eastern exits from Lingen.

This was later proved to be the case. The Battalion moved forward on to its objective without meeting any opposition whatever. Seeing the position as the Germans must have held it one could not but be grateful that they had decided to withdraw. The forcing of the dried up canal against determined opposition would have been a formidable and costly operation. But the five stragglers who were picked up proved that their commanders had weighed threat to their rear against the strength of the position and found the latter wanting. So the chase was handed over to I KOSB, who during the rest of the day dealt voraciously with a few hundred Flak troops who had remained behind. 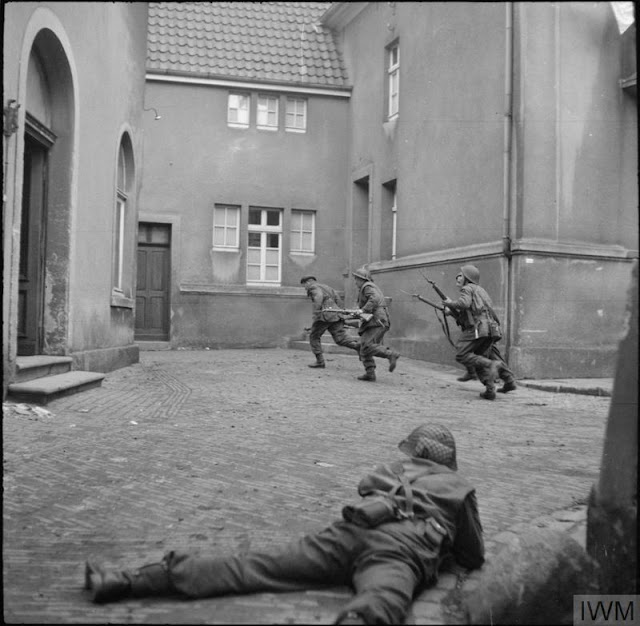 After being engaged in such bitter fighting while everywhere else the enemy had crumbled before momentous advances, it was a relief to experience a change ourselves.

To the West of the Weser 7 Armoured Division had made a complete breakthrough towards Bremen from the South, and it seemed once more that nothing could prevent the fall of the town.

3 British Infantry Division, whose presence in Lingen had been rendered superfluous by the advance of 53 Division from Rheine, was now despatched along the axis of 7 Armoured Division with orders to take over the ground won, and hold it against infiltration by the large number of German Troops whose line of escape Eastwards across the Weser was rapidly being cut off.

Overnight our horizons were broadened and orientations were transformed. On the evening of 7th April the Battalion had expected an order to press forward the attack South of Lingen.

On the morning of the 8th. advance parties had, set off in the opposite direction, and after a long journey had come to rest in Diepholz, nearly 100 miles distant by road.

Here we took over from a Battalion of 52 Division who were about to leave Diepholz to move nearer the Weser. The Battalion arrived at 0400 hrs. on 8th. April, having travelled in convoy through the best part of the night.

Diepholz was a splendid reward for the labour of Lingen. Vigilance had to be maintained as rigorously as before, but accomodation was excellent, and the town itself was clean and cheerful.

Advance parties, who had travelled by day, had already seen the quality of this beautiful Westphalian countryside, with its hills and valleys and great rolling stretches of green, florescent country, and Diepholz itself was quite in sympathy with it. Indeed the BBC and the Press had already established their forward Headquarters in its heart.

The whole Battalion was positioned in Diepholz except "B" Company which was holding a little village called Jakobskrubber, some 3 miles further lip the axis. The threat to either place from the ground was never very substantial, but from the air it was considerable.

In the evening the Luftwaffe used to appear with marked regularity, and on one occasion its bombs completely demolished the houses adjacent to Bn. HQ. But the battle was by no means one-sided. Small arms were shot off with great spirit whenever this skeleton air force appeared, and "B" Company were able to signal a kill before we left Diepholz. It was the first German aircraft which the Battalion had directly shot down in this campaign.

There were other moments of interest in Diepholz. Several successful patrols were undertaken by a force of arms from "S" Company under Capt. Gray. One of these was towards Löhne when 17 prisoners were taken without a shot being fired, Lt Daniels, our Dutch Interpreter, rang up the doctor in Löhne, asking him to come to visit his ailing child, and gained the information that the Germans had withdrawn from Löhne.

Next day, when "D" Company had moved out of Diepholz to positions around this farm, the German doctor in charge of a military hospital in Löhne presented himself to "D" Company Commander, Major Bird MC, and stated that if we didn't shoot he would "Surrender Löhne fightless"

The reply he got was "Surrender Löhne 'fightless' and we won't shoot." This was done, and the town was later donated to 52 Division Recce, who had been fighting their way towards Löhne from the South.

While we were in Diepholz we heard that our doctor, Capt. Wright, was to be promoted Company Commander of a Field Ambulance, and was to leave us for a post in 43 Division. "Doc" Wright had been in France with the Battalion in 1940, and had remained with it until this date without a break, throughout this long period he had been a pillar of strength, and a model medical officer, for it mattered little to him whether he dispensed his cures in the peace and stability of his RAP, in England, or beneath a continuous rain of shells in action.

The Battalion rejoiced at his promotion, but it was with heavy hearts that we watched him take his leave. His place was taken by Capt. Williams, who joined us from 9th. Field Ambulance.

On April 12 we moved on forty miles to Harpstedt. Again we were holding ground which had been overrun by the armour, but here the enemy was more serious and purposeful.

The Battalion was in position in Harpstedt by 1330 hrs. 13 April, and straightaway was ordered to send forward patrols along the three main roads running North East, North, and North west out of Harpstedt with the object of making contact and discovering the whereabouts of the enemy.

These patrols were remarkable, both for the distance they covered and the information they brought back. On the right, a patrol from 'D' Company under Lt Campbell, reached a road junction some 5000 yards North East of Harpstedt, just outside the village of Kirschseelte.

At this point they captured a small enemy standing patrol who were responsible for covering the approaches to Kirchseelte. They discovered the information that their unit was two Companies strong in Kirschseelte.

On the left, a patrol from "A" Company, under Lt Songest, reached a point about 1000 yards South of Horstedt, a little village 5000 yards North west of Harpstedt. From civilian sources he obtained the information that Horstedt was held by a company, and that there were mines along the road leading to the place.

Just as he was questioning the civilians, six SP guns opened fire on Harpstedt from only 400 yards away, and he was able to pinpoint them accurately. Later the same day these were taken on by a battery of medium guns.

The third patrol, driving Northwards along the main Harpstedt - Delmenhorst road, was not so fortunate. Accompanied by a detachment of carriers and infantry engineers, the patrol of 14 men, under Lt Harris, reached a point half a mile South of the village of Gr. Ippener, and some 5000 yards north of Harpstedt.

Here they had a brisk skirmish with a few Germans who fired at them from the edge of a wood. One of the enemy was shot dead, and another was wounded but escaped through the wood. Not satisfied with this achievement, Lt Harris decided to move further forward on foot, leaving the carriers at the edge of the wood.

Two hundred yards further on a disastrous explosion obscured the patrol from the carriers, and it was at once apparent that some form of prepared charge had been activated. The patrol commander was killed with seven of his men, three were missing, one of whom was subsequently discovered to have been taken prisoner. Two others were wounded but managed to get back to the waiting carriers.

The situation was now grave, for the explosion was the signal for intense machine gun and Mortar fire from the enemy straight down the road, so that approach to the scene of the explosion was virtually impossible. The carriers waited for some time, and then withdrew with some difficulty.

This disaster, falling so suddenly and so unexpectedly upon the Battalion, was a severe blow. The loss of virtually a complete patrol, and a gallant leader, was not easy to accept. But the value of its work must not be forgotten.

It had located definitely a number of positions which had added up to company strength defending Gr. Ippener, and this information, when added to the other two patrols contributed much to a sound appreciation of the dispositions of the enemy covering Delmenhorst.

It did a lot to modify the exuberance of the plans for the capture of the town, which if executed without this information might have involved heavy losses.
Posted by Codge at Friday, November 05, 2010