The Battalion was first introduced to combined operations in this war when it was sent for a period of training to The Combined Training Centre, Inveraray, in the Summer of 1942.

In those early days the boating equipment was primitive, canvas and plywood craft with outboard engines; but on each successive visit to Scotland the equipment became better and the Battalion more efficient in Combined Operations. 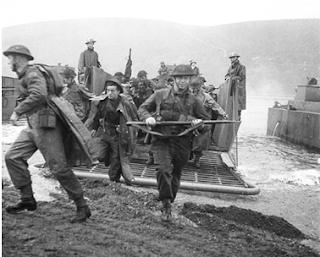 By the beginning of 1943, they were considered ready for this type of operation, and after another short period of hardening and Combined Operations training in Scotland, were almost sent to Sicily. At the very last moment, this movement was cancelled and Canadians were substituted. Then, and during the subsequent months, everyone, felt intensely disappointed.

However, information received towards the end of 1943 proved that the Division of which the Battalion was part, had been retained in England for an even greater and more dangerous job of work, the long awaited invasion of Europe.
Posted by Codge at Friday, November 05, 2010