Zero hour for the second attack on the Wanssum pocket was fixed at 0100 hrs December 1st.

Once again brilliant moonlight proved the downfall of the operation; once again visibility was about 200 yards and any movement could be seen as if in daylight.

The leading platoon in the event advanced about 300 yards and was then fired on by a Machine Gun from the direction of Wanssum. This fire was at once returned but then three more Machine Guns began firing and the platoon was pinned down.

Two verey lights then winged upwards from the enemy lines and straight away down came his defensive fire. Our 2" Mortar was busily engaged trying to silence the Machine Guns but these kept firing as they were well dug in and at least one was firing from a house. The shooting continued low and accurate, prohibiting any attempt at manoeuvre. Two of the enemy Guns were Brens and some confusion was caused among our men.

Meanwhile the other two platoons were toeing the start line. Captain Gaffikin had intended sending one of them around the left flank but soon he realised that such a committal would involve very heavy casualties and without much greater support he would not feel justified in doing so.

The first platoon had made another attempt to get forward but had suffered casualties and Captain Gaffikin now sent forward the order to disengage and to return and dig in with the rest of the Company. After a long and arduous crawl under low machine gun fire throughout, this platoon returned to the Start Point. Altogether the Company lost six killed and thirteen wounded. 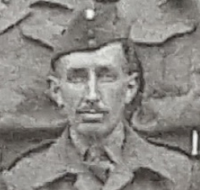 'D' Company had a similar experience when its leading section crossed the Blitterswijk-Wanssum road to clear the wood on the far side. As our men dropped into the gully twin spandaus fired down it wounding the Section Commander Cpl Carroll one of his men, and forcing the remainder to lie flat. This evoked a most courageous action from L/Cpl Rossiter in another section of the same platoon.

Volunteering to go to the assistance of the wounded he ran forward into the open, crossed the road and picked up Cpl Carroll. Placing him over his shoulder and calling to the others to follow him he ran back to the cover of the wood. Throughout the whole of this period he was under heavy and sustained fire from the Boche positions and only by the greatest good fortune did he escape injuries. 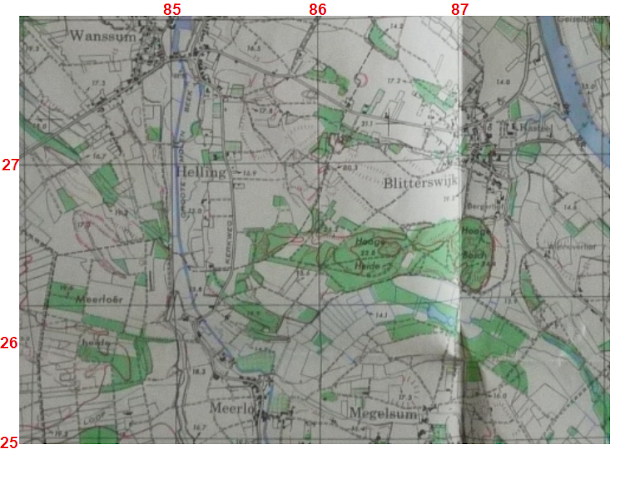 By now he Commanding Officer having heard from both 'B' and 'D' Companies had decided to call off the operation for the night. Difficulties however still remained.

Flooding had made the southern approach to Blitterswijk passable only to a weasel, and evacuation of casualties on such restricted transport - only one was available for 'D' Company at this stage - provided just one of the problems.

Shelling and mortaring from the other :side of the river was another, and casualties were inflicted upon several of those engaged in the passage of wounded back wards to the RAP and of food and ammunition forward to the Companies.

Captain Montgomery, MC second in command of 'D' Company and L/Cpl Callanan, NCO i/c stretcher bearers, who was wounded by shrapnel, were both out standing for their cheerful and tireless devotion to this vital work. So, too, was Captain Henry Taylor, the FOO attached to 'D' Company, who never ceased trying to silence the enemy's guns or to neutralise his ground defence.

So too was the work of Major Nicholson our Battery Commander who had supported us since the far off days of Cambes Wood. Not since Caen had he fired such a quantity and throughout the action his advice and assistance was, as always, a constant source of strength to the Battalion.

By now it was clear that the liquidation of this pocket would demand tanks with probably greater infantry support. An attack was planned involving two squadrons of Churchill tanks and two battalions of infantry. But although planning and reconnaissance reached an advanced stage this operation proved unnecessary. On the morning of December 2nd a reliable
civilian came into our Headquarters in Meerlo and announced that the Boche had withdrawn across the Meuse.

This seemed doubtful because a German patrol had approached 'D' Company's position in the small hours of the previous night. Rfn Irwin, the forward sentry, saw them coming and woke his section. Holding his fire until the best moment be machine gunned the oncoming patrol. The patrol replied and shortly afterwards shot off a verey light.

This brought down the German Defensive Fire under cover of which the enemy withdrew. Later however the groans of a wounded man were heard, and Rfn Irwin went forward and brought him in. Then having "got his man" he bad breakfast and went off to Brussels.

This all pointed to the enemy being able to hold his bridgehead as tenaciously as ever, but the civilian seemed quite certain of Boche had gone and Wanssum was occupied the same afternoon.

The elimination of this pocket had cost the Battalion some 70 casualties including almost a complete platoon of 'C' Company, and a large section of the Pioneer Platoon, headed by Lt Shimmin and the Pioneer Serjeant, Sjt. Taylor.

Lt Shimmin was a particularly severe loss. He had joined the Battalion with the Reinforcement Company in the critical stages of the campaign. He had led the Pioneer Platoon throughout with efficiency and skill, particularly in laying mines around the positions at Cambes, and in building bridges during the passage of the Escaut Canal.

We lost two other officers, one before, the other after, this little battle. The first was Captain Sheane who died in hospital in Helmond. For some 18 months he had been Senior Liaison Officer at Brigade Headquarters and, landing with them on D Day, he remained with them until, at the beginning of November, he came back to the Battalion as second in command of the Carrier Platoon. He was immensely popular and it was a grievous blow to everyone to hear of his death. 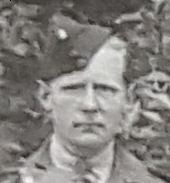 
Soon after the occupation of Wanssum, Captain Sturgeon was reported missing. Apparently some Germans had contrived to lie up in the house which he had made his Headquarters and during the night they came down into the cellar in which he was sleeping, forced him and a signaller with him to accompany them, and then avoiding the platoon prowler guards, disappeared into the night. 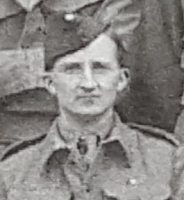 They must also have acted with great stealth because the Platoon Serjeant and a runner who were also asleep in a further partition of the cellar were undisturbed. At any rate the Battalion lost in Captain Sturgeon one of its rocks of strength.

He had been a prominent member of the Battalion for not months but years and had landed with the Battalion on D Day as Adjutant. Before D Day he had reigned supreme in that essential sphere of assault scales and vehicle loads and had played a most distinguished part on the A and Q side in planning the initial operation. At Flers he had given up Adjutant to become commander of the Carrier Platoon and when on December 5th he was reported missing it was as if the Battalion had lost part of itself.

As a result of this action, the Military Cross was won by OC 'D' Company, Major Bird, and also by the FOO Captain Taylor, both awards that were heartily acclaimed throughout the Battalion. 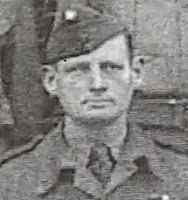 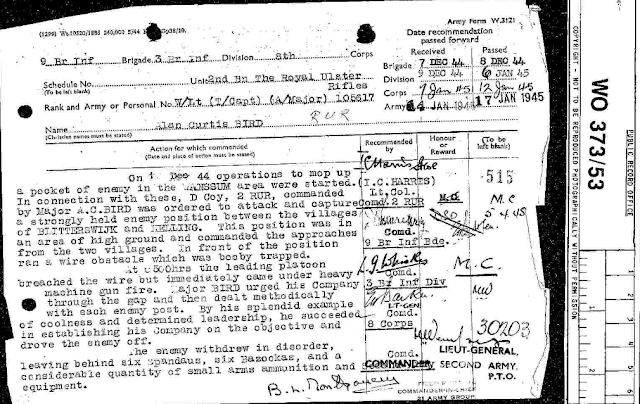 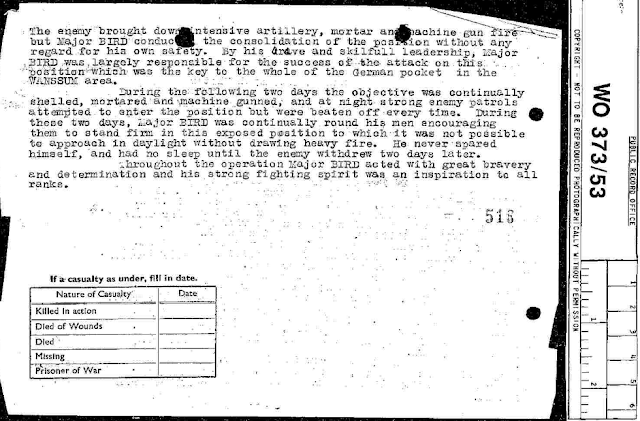 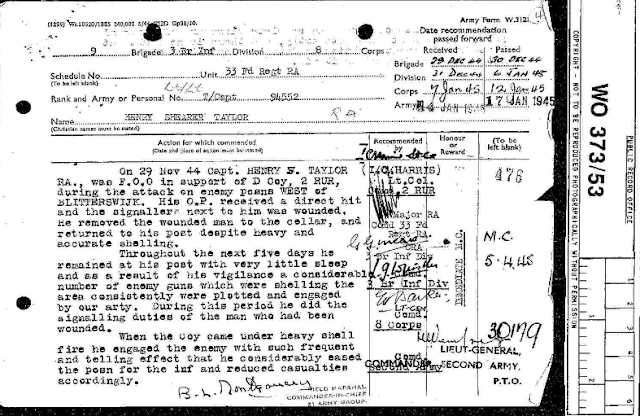 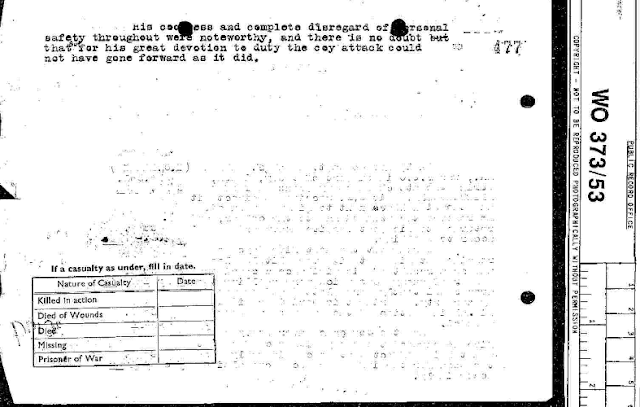 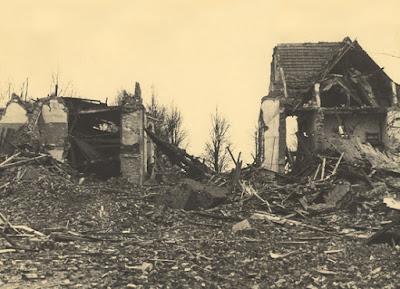 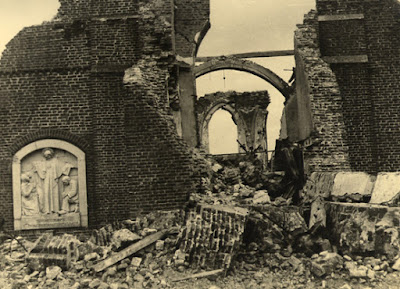 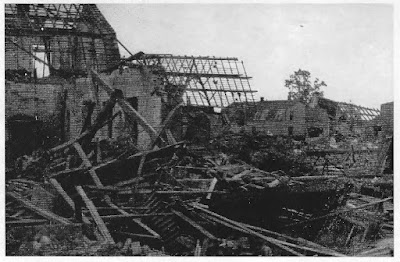