At 1000 hours on D Day, the 6th June, 1944, the Landing Crafts Infantry containing the Battalion touched down on the beach of Normandy at a spot slightly west of Ouistreham, a pleasant French summer resort with a wide sandy beach fringed with sand dunes.

Here the Battalion caught first sight of the enemy as batches of snipers with hands over their heads were being rounded up from the houses and sand dunes lining the beach. 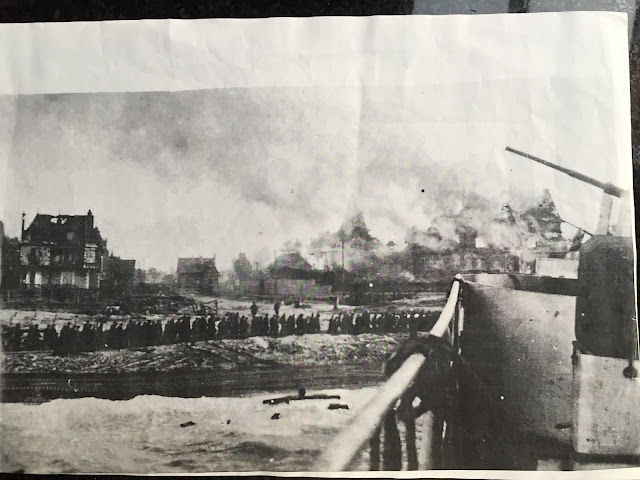 By this time the sea had developed a considerable swell. The Battalion was well used to wet landings when carrying out exercises, but this was without any doubt the wettest on record, most people landing in at least four feet of water and many in as much as five and a half feet.

The majority became soaking wet from the top of their heads. Although the beaches had been almost cleared of the enemy, hostile shells and mortar bombs were falling in fair quantities. Consequently, even though the Battalion was part of the reserve brigade in the assault Division, the landing was made very difficult and uncomfortable. 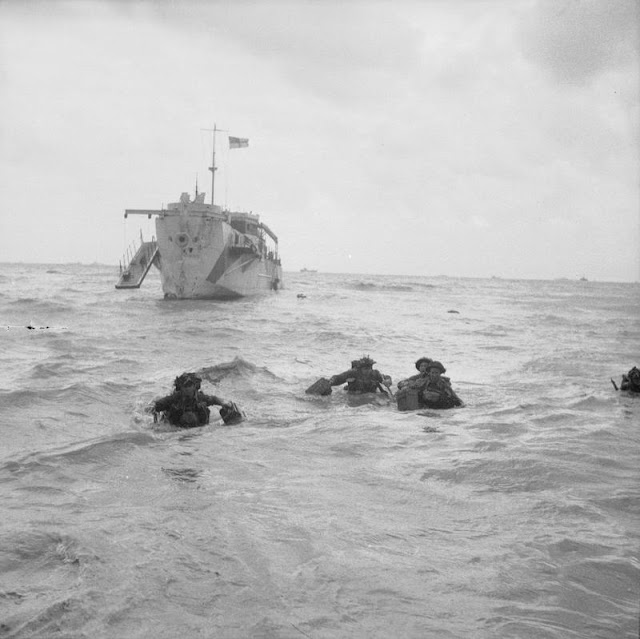 Many of the Riflemen being small in size were finding it difficult to get ashore, particularly in view of the fact that over and above their normal kit - heavy enough --, they were carrying a bicycle! CSM Walsh of A Company, and Rfn Ryan, MM, of B Company did great work by getting a life line ashore from the Landing Crafts Infantry, and holding them in such a manner that others were able to beach themselves with greater ease. Few casualties only were experienced on the beach, those there were, being from shell and mortar fire.


Montgomery speaking to Rifleman Ryan MM prior to D-Day. Ryan had been awarded his medal for action at Ypres in 1940 and was one of those responsible for the safe arrival of the 2nd Battalion on the beach on D-Day by securing a line to the beach 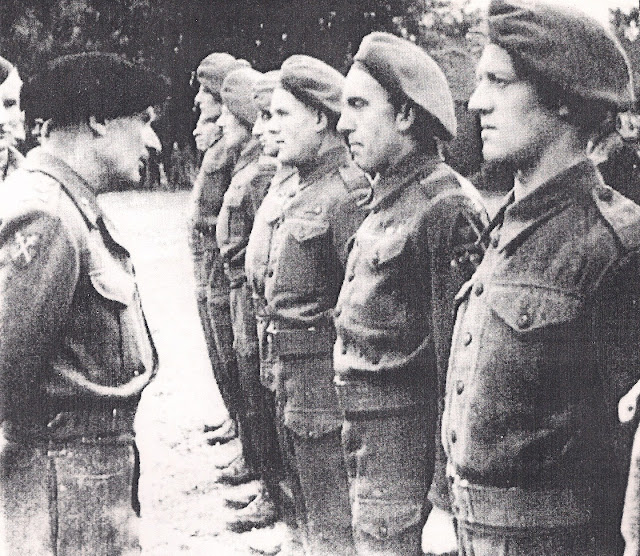 The Battalion then quickly made its way from the beach to Lion-sur-Mer, a small village about half a mile inland which was the Assembly Area. Here they were met by OC HQ Company, Captain M. D. G. C. Ryan and his party of guides who had landed an hour previously with one of the assault brigades to make a reconnaissance of the Assembly Area. 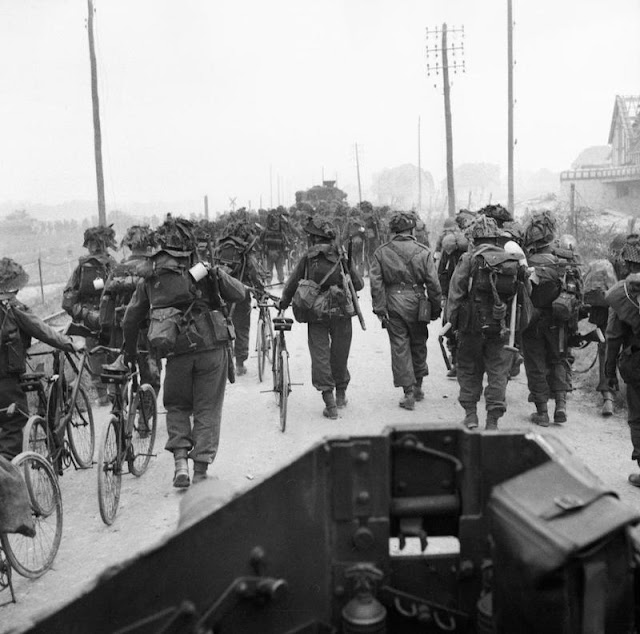 The loss of the Brigade Commander was a severe blow as his enthusiasm and charm during approximately two years with the brigade had made him particularly popular with all ranks of the Battalion. Another blow was the loss of Captain A. G. Sellers, the Mortar Platoon Commander, who whilst in the assembly area was wounded in the legs by small arms fire, probably from a sniper.

Fortunately his No 1, Sjt McCutcheon, had been with the Platoon for many months, and assumed temporary command. During the move to the Assembly Area, the Battalion was greatly cheered by the sight of the Airborne Troops of which the 1st Battalion was part, flying over and landing some distance away.


Troops of "A" Company, 2 RUR pause in La Brèche d'Hermanville during their move inland 6 June 1944 from Queen Red Beach. On the right are Rifleman McNaul from County Antrim and Rifleman Charles with his Bren Gun (subsequently awarded the Military Medal for his actions on 18th July outside Troarn (IWM image) 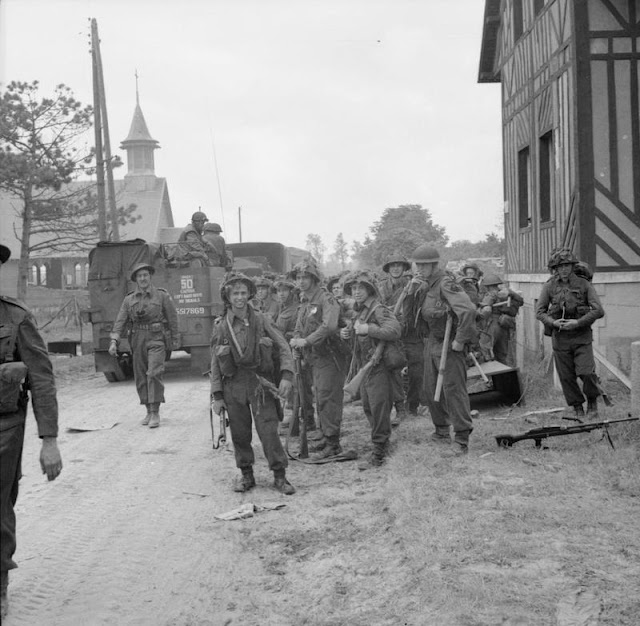 Having assembled together and sorted itself out from the inevitable tangle which such a landing makes, the Battalion was ordered to occupy the high ground at a point slightly North East of Periers sur le Dan, where it dug in for the night in readiness for a quick move forward.

On the way to this area, seven German snipers had been captured, and ten other prisoners of war, together with a fair quantity of weapons and equipment. 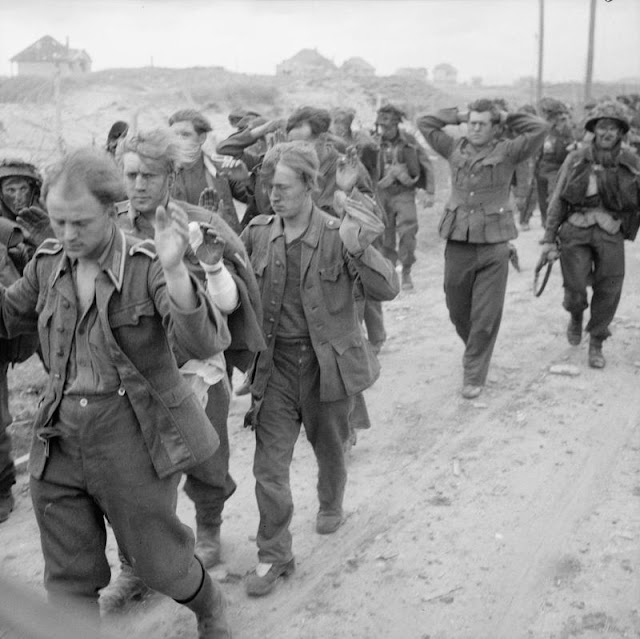 Lt-Colonel Harris had returned to the Battalion, the Brigade having been taken over by Colonel A. D. G. Orr, DSO, who was not unknown to the Brigade, having acted as its Second in Command for a few months prior to D Day.
Posted by Codge at Friday, November 05, 2010