Early next morning, two more patrols were sent out. One platoon off A Company, under Lt R. Wise with a troop of tanks went down to Calix on the Eastern outskirts of Caen and, simultaneously, another platoon - also A Company - under Lt B. R. Burges moved to St Julien in the North West of the town.

The first patrol reached its objective and remained there until recalled later in the day. It had trouble with snipers and the Platoon Commander was himself wounded in the head. Lt Burges with his platoon readied St Julien, and then began an advance of his own accord into the heart of the town. 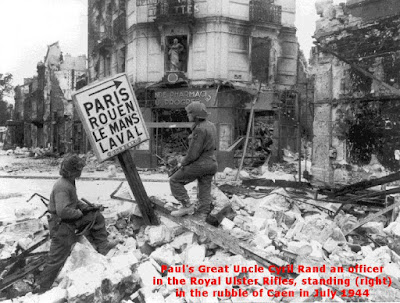 Some light resistance was brushed aside but later on the defences stiffened and casualties were sustained. Lt Burges was himself wounded, though able to retain control of his platoon, and two of his N. C. Os. were killed outright. Thereupon this patrol returned to its position at St Julien and did not link up again with the Battalion until the following day.

It may be said, however, that this platoon was the first into the heart of the town because the Canadians did not appear on the right until late in the afternoon and the forward elements of our own Battalion were not in Caen much before 1100 hours.

At 0930 hours 9th July the Battalion began their advance into Caen. B Company led the way progressing slowly but surely, systematically clearing the ruins of enemy. Small groups of retreating Germans were dealt with, but no organised opposition was met and abandoned machine gun posts and rocket apparatus testified to the swiftness of his withdrawal.

Owing to the rubble and devastation caused by the bombing, movement was slow and difficult. There was no question of vehicle movement here, and so throughout this advance the infantry relied solely and entirely upon their own resources.

By 1130 hours Major Hyde was astride the Boulevardes des Allies and the remainder of the Battalion was pressing forward.

Some casualties were sustained by D Company before moving off from Hill 60, where Lt Palmer and his Platoon Serjeant were both wounded and evacuated: but L/Sjt Bonass assumed command and led the Platoon calmly and efficiently for the rest of the action. 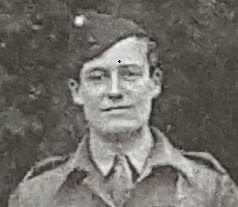 
When the main body of the Battalion readied down into the town, the advance soon assumed the air of triumphant progress rather than a calculated operation of war; the people of Caen were determined to make it so.

We discovered afterwards that they had suffered all the brutalities that had become commonplace in Europe. In addition they had seen their town laid waste in a series of RAF attacks, by their own friends, the British. 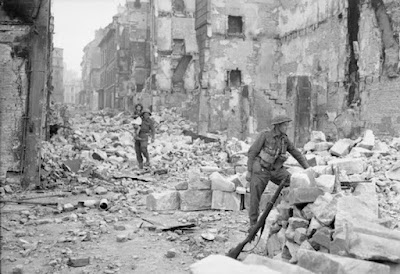 If we were ever doubtful of a welcome reception, the first few hours in Caen put our minds at rest. Flags of Fighting France were draped out of windows, and the people poured out of their houses with greetings and glasses of wine.

On the Boulevardes we were met by the Captain of the Resistance Movement with several of his comrades who gave us "Liberté" as the password agreed upon by themselves and their Headquarters in London.

One of their number guided C Company along the Boulevardes and others proved themselves invaluable in disclosing hide-outs of German snipers and machine gunners. It may be said here that through the complete mastery of the language displayed by Major J. C. S. G. de Longueuil we were able to take full advantage of their assistance.

We met many other interesting people in Caen, two of whom may be mentioned here. One was Squadron Leader Sprawson, DFC, RAF whose Lancaster had been shot down near Caen on D Day and who had since then been sheltering with a patriot family in Caen itself. Having experienced RAF bombing at the receiving end, he was anxious to get back, and having paused for a brief moment at Brigade Headquarters to make a recording for the BBC, he hurried back to England. 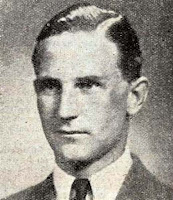 Squadron Leader Eric Sprawson DFC of 106 Squadron was the pilot of an Avro Lancaster III that was shot down by a fighter over Caen on D-Day before being sheltered by a French family until the Royal Ulster Rifles liberated Caen on the 9th July - see Personal Accounts for more detail.

The second was a Frenchman whom our men found to be widely travelled but who readied the peak of his popularity when he revealed himself an habitué of "Mooneys" in Belfast. Needless to say he was an old soldier.

The rest of the operation can be swiftly summarised. We pushed gradually down to the line of the River Orne and then systematically mopped up such disorganised resistance as remained.

Our most lasting impression and remembrance of Caen will be the magnificent spirit of friendship and co-operation displayed by its citizens. The men of The Royal Ulster Rifles will pay them lasting tribute and can hope to have done something towards forging a bond of mutual sympathy and friendship.
Posted by Codge at Friday, November 05, 2010